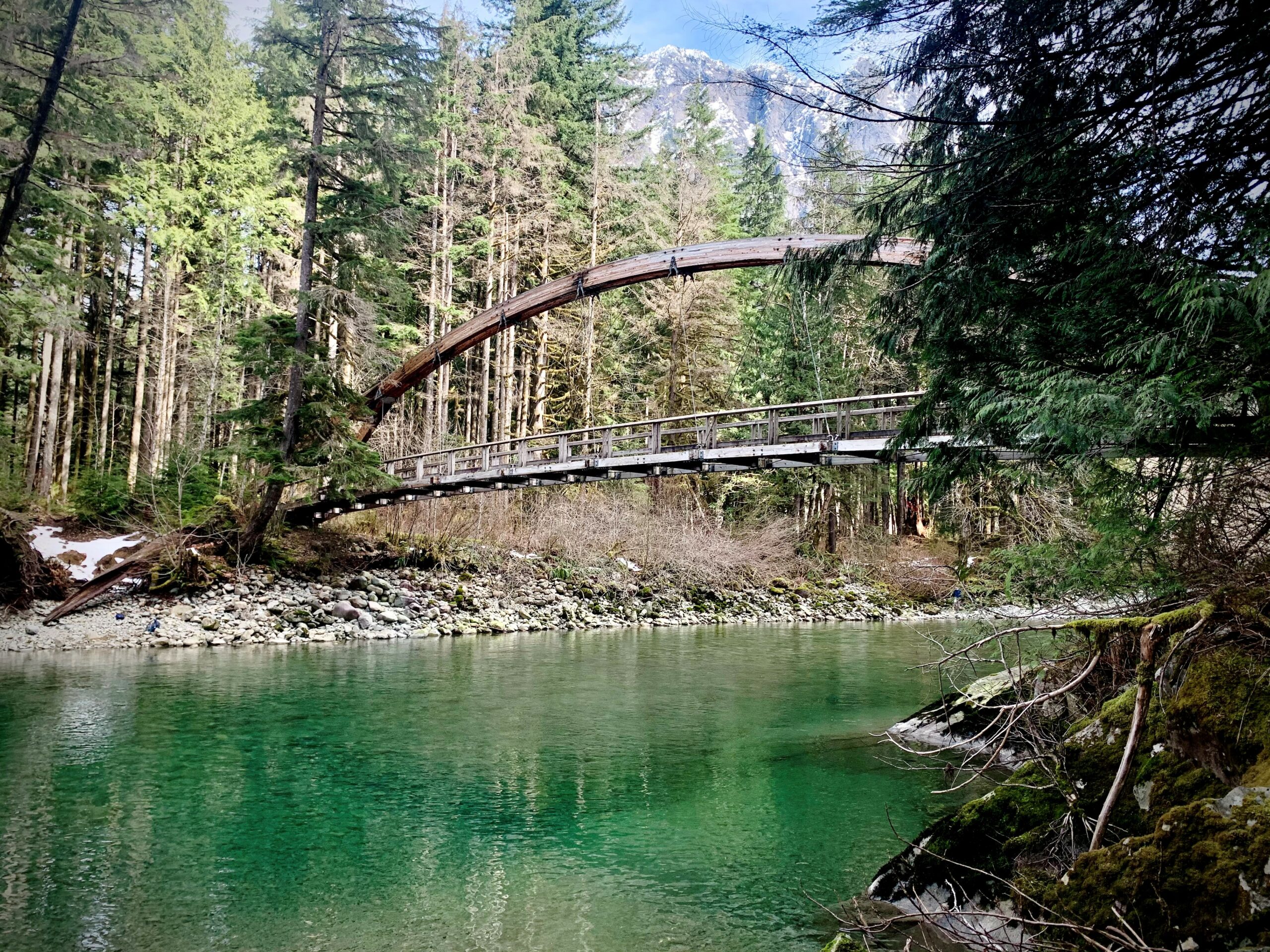 If you’re a seasoned recreationist within the Mountains to Sound Greenway National Heritage Area and a fan of the Middle Fork Snoqualmie River Valley, you may recall the tumultuous history of the Middle Fork Snoqualmie River Trail. Throughout the years, the trail has faced an uphill battle of erosion, washouts, and most recently, a massive landslide in April 2018 that left most of the trail inaccessible. Thanks to the Forest Service, in collaboration with several local partners, the trail is now reopened to the public! 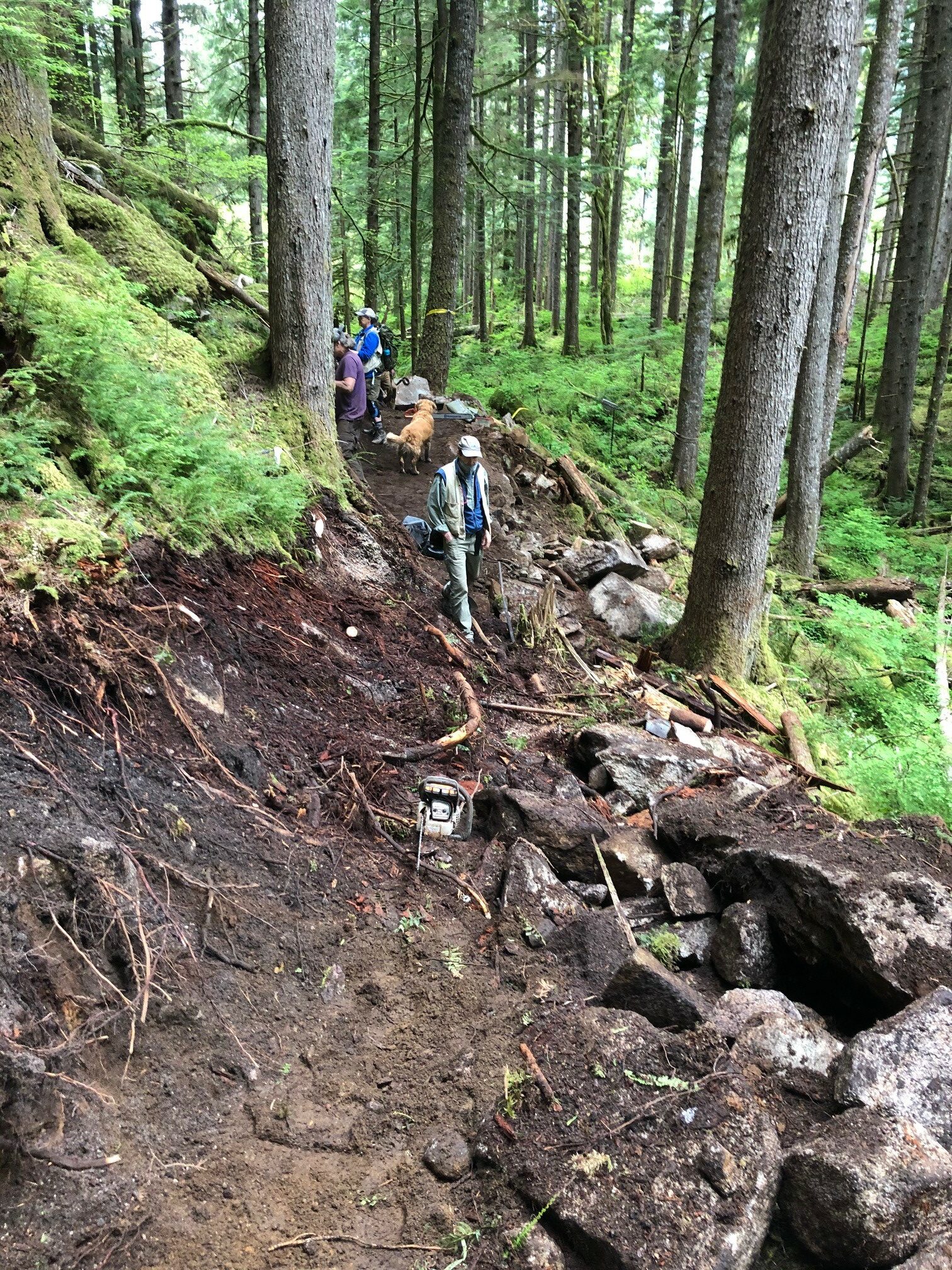 Following the slide, there were many steps needed before this work could begin. The first step was to determine a course of action: should the trail be improved through the slide zone, or should it be moved out of that area? The Forest Service team, supported by the Mountains to Sound Greenway Trust and others, decided on a new, more stable route. Once the route was determined, an environmental analysis was performed to ensure that the course chosen was suitable.

Second, the community needed to find funding for the reroute. The Forest Service secured a grant from the Washington State Recreation & Conservation Office through the Nonhighway and Off-road Vehicle Activities program, leveraging volunteer and other contributions from Washington Trails Association (WTA) and the Greenway Trust (thanks to the Middle Fork Campaign).

The Forest Service selected Oregon Woods, a trail contractor, to begin the work of moving the trail, which involved clearing the new path, and establishing a trail through some tough sections of bedrock and varying soils. Starting in August 2021, the Forest Service and Oregon Woods, along with the Greenway Trust, WTA, Evergreen Mountain Bike Alliance, Backcountry Horsemen of Washington, and numerous volunteers all worked together to reroute the trail out of the damaged area, and repair/maintain the closed section of the trail (from the Middle Fork Trailhead to the Dingford Creek Trailhead). During the month of October, Forest Service crews worked fervently to break up and remove the remaining bedrock and boulders that were required to complete the new section of trail. 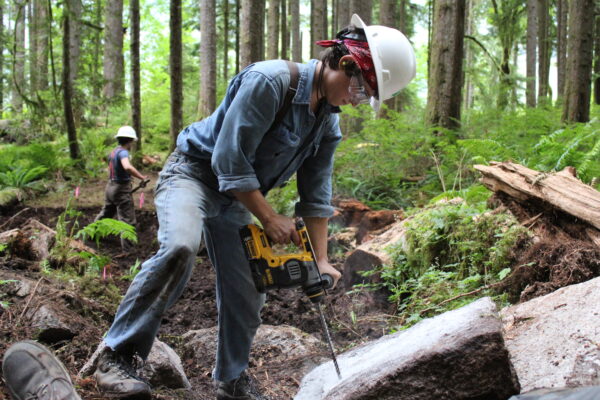 While Oregon Woods carved bedrock, broke boulders, and otherwise excavated the relocation, which winds across the steep and forested slopes of Stegosaurus Butte, project partners worked collaboratively to log-out, brush, and repair aging boardwalks, turnpikes, and other trail structures along the entire five miles between Taylor River and Dingford Creek.

For example, the Greenway Trust Trail Crew worked on a 32-foot-long puncheon bridge spanning a muddy seep drainage just west of the landslide area. This bridge connects the old trail to the new rerouted trail built by Oregon Woods, which bypasses the 2018 landslide. You can see photos and more info on that project here. 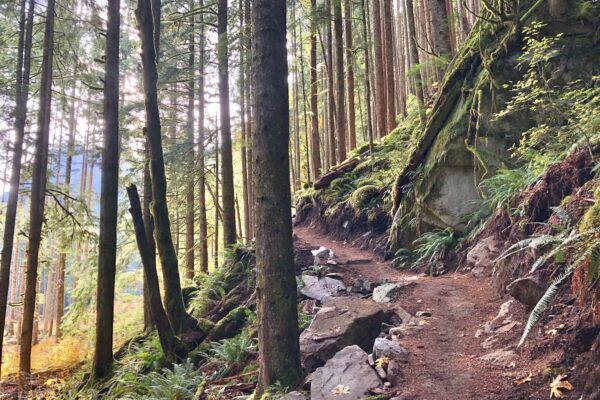 The 15-mile Middle Fork Trail is the “backbone” of the trail network in the Middle Fork Valley. Hikers, backpackers, trail runners, mountain bikers, and equestrians utilize this scenic and tranquil trail, which provides access from the low-elevation reaches of the Valley all the way into the Alpine Lakes Wilderness Area. The trail weaves through a temperate rainforest, past pockets of old-growth and historic relics from the Valley’s timber and mining eras, including a stretch of trail that follows the former railroad line built to haul timber out of the area. Its gentle elevation gain allows recreational users of all ages to enjoy the Valley.

Why Do Landslides Happen in the Middle Fork Valley?

The Cordilleran Ice Sheet dammed the Middle Fork Snoqualmie River roughly 14,000 years ago, creating a glacial lake that extended up the Middle Fork Valley. Over thousands of years, silty sediment settled into the Valley floor, creating the clay-rich soil that you see there today. In addition, the Middle Fork Valley regularly receives more than 100 inches of rainfall each year. Due to clay deposits just below the surface, much of the soil doesn’t absorb the immense amount of rainwater the Valley receives, which can lead to landslides, or large amounts of soil and rock that slide downhill. As these slopes fail, it changes the landscape of the area and can damage human-made trails, roads, bridges, and other structures.

“Landscapes are dynamic and changing – we just don’t often notice it, except when it happens in dramatic fashion like this.” – Mike Stenger, Recreation Projects Manager for the Greenway Trust

You can support future projects such as this by making a donation to our Middle Fork Campaign.

Local nonprofits and volunteers are teaming up to make the trail safer and more sustainable for its nearly 300,000 annual visitors. Rattlesnake Ledge, owned and operated by Seattle Public Utilities

In April 2018 the Middle Fork Snoqualmie River Trail experienced a major landslide that left most of the trail inaccessible. Although the trail has remained closed to the public since

On September 25, the Mountains to Sound Greenway Trust joined with others all across the country to celebrate National Public Lands Day 2021 and engage in a stewardship event. NPLD