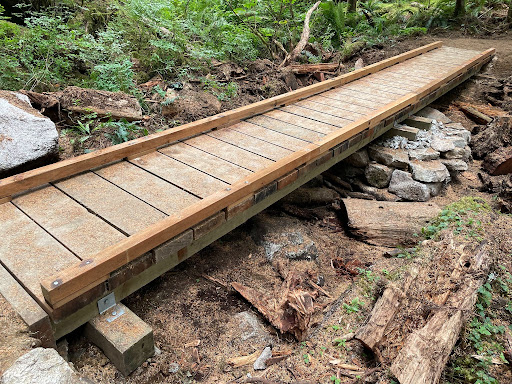 In April 2018 the Middle Fork Snoqualmie River Trail experienced a major landslide that left most of the trail inaccessible. Although the trail has remained closed to the public since then, recreators have still used parts of the trail. It has continued to be a priority to fix this trail for safe access.

In August 2021 the Forest Service and a trails contractor, along with the Greenway Trust, Washington Trails Association and Evergreen Mountain Bike Alliance, and volunteers all worked together to reroute the trail out of the damaged area.
Across several weeks, the Mountains to Sound Greenway trail crew worked on a 32-foot-long puncheon bridge spanning a muddy seep drainage just west of the landslide area, and connects the old trail to the new reroute trail built by Oregon Woods, which circumnavigates the 2018 landslide. The bridge consists of four 16’ stringers, four 5’ sills, and 34 12’’x4’’x4’ pieces of decking (two pieces of decking for the bulkhead). The Greenway Trust opted to go with a customized rock foundation for this structure for long-term stability.

Thanks to matching funds from the Middle Fork Campaign and committed contributions from volunteers with WTA that helped the Forest Service secure the grant to work on the bridge building.

Working Toward a More Connected Landscape in 2021

In 2021, collaborative partnerships continued to be a driving force behind conserving natural areas across the Mountains to Sound Greenway National Heritage Area. These efforts are aiming to protect public

Continue Reading : Working Toward a More Connected Landscape in 2021

If you’re a seasoned recreationist within the Mountains to Sound Greenway National Heritage Area and a fan of the Middle Fork Snoqualmie River Valley, you may recall the tumultuous history

Local nonprofits and volunteers are teaming up to make the trail safer and more sustainable for its nearly 300,000 annual visitors. Rattlesnake Ledge, owned and operated by Seattle Public Utilities