The Greenway Way
Our Coalition
Leadership

The Greenway Connects it All

Vast forests. Meadow-strewn mountain peaks. Small farms that feed city markets. Rural communities, keepers of our region’s colorful past. Vibrant cities where people want to live and companies want to locate. Broad swaths of land for wildlife to roam. Hundreds of places for skiing and hiking, kayaking and cycling. That’s the Mountains to Sound Greenway.

Weaving together the urban and the wild, the Greenway connects 1.5 million acres surrounding Interstate 90, including the 15th-largest metropolis in the United States. More than 900,000 acres of land are now publicly owned, from city parks to expansive public forests. Another 100,000 acres are conserved as permanent private forests.

What do such numbers add up to? Breathing room.

The perspective on life only an ancient tree can bring. Incomparable beauty. Even this stretch of interstate highway, so commonly the province of strip malls and billboards, is instead the country’s first to be designated a National Scenic Byway. How rare. This vision—of the way life should be, of equal support for economic vitality and nature—is not static.

It is brought into being every day in the Greenway.

The Mountains to Sound Greenway Trust leads and inspires action to conserve and enhance the landscape from Seattle across the Cascade Mountains to Central Washington, ensuring a long-term balance between people and nature.

How does the Greenway Trust achieve all that? Over the years, the Greenway has developed a way of doing things that is somewhat unique, and seems to work.  We believe that the values we operate off of day-to-day are largely responsible for our success, indicative of our character, and transfer well to other areas of civic action. Read more about the How We Work.

The Greenway Coalition is a catalyst for action, convening multiple interest groups.

“A collection of strange bedfellows,” the Greenway Trust has been called, and it’s hard to 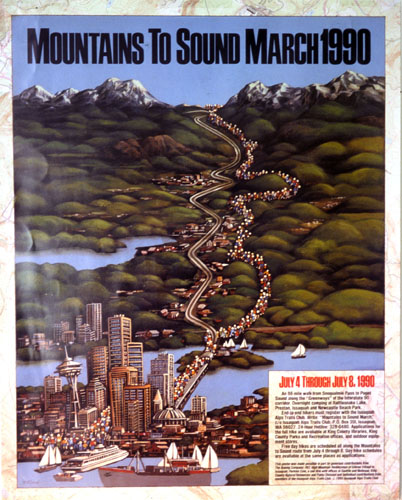 deny. We are a coalition of environmentalists and timber companies; developers and farmers; federal and state agencies; cities and counties; nonprofits and businesses. But the vision is unanimous: healthy, vital, very livable communities.

The idea began taking shape in 1990. It was increasingly clear that rapid population growth threatened the character of the region. Unchecked, one could easily see solid development along Interstate 90, stretching out of Seattle and through the Cascade Mountains. Hundreds of citizens, led by members of the Issaquah Alps Trails Club, staged a march from Snoqualmie Pass to the Seattle waterfront. We needed to save these magnificent landscapes, they decided—before it was too late.

In 1991, under civic leader Jim Ellis, the Mountains to Sound Greenway Trust was born. Our friends at HistoryLink did a deep-dive into the history of the Greenway which you can find by clicking here.

Today, the coalition that makes up the Greenway Trust encompasses a 60-member Board of Directors, a 40-member Board of Advisors, a 50-member Technical Advisory Council, a dozen or so staff members, conservation corps crews outdoors restoring public parks and river corridors, and a community of hundreds of citizens and dozens of interest groups.

Together we are balancing thoughtful development and conservation, in ways big and small.

How does a 60 member Board of Directors get anything done? It sounds impractical, but the Greenway Trust board meetings are vital—and even fun. Over dinner, people talk through the projects they have in play. Friendships are built. Mutual interests are discovered. There’s a certain synergy.

The Tiger Mountain trailhead is just one small example springing from a board meeting: The trailhead was overflowing with cars. The Department of Natural Resources thought it would have to cut down surrounding forests to expand parking. Meanwhile, Puget Sound Energy needed to continuously clear trees under some neighboring power lines. The solution? Put a new parking lot under the power lines. More forest; less power line maintenance. Without the Greenway Trust board meetings, along with continual conversations in many other venues, such great solutions would never happen.

Leadership
Get to know our coalition leaders.

Blog
Stay up to date on current Greenway projects and news.