Since 2005, the Greenway Trust has worked collaboratively with Washington State Parks to implement more than 60 acres of riparian restoration along the 6,000 feet of Issaquah Creek that passes through Lake Sammamish State Park before emptying out into Lake Sammamish. This has included securing more than $1.2 million in funding for ecological restoration efforts, with grants from local, county, state, and federal programs, as well as contributions from private businesses, individuals, and corporations. The primary goals for restoration are around salmon recovery, with a focus on improving habitat conditions for Chinook salmon, a species listed as threatened under the Endangered Species Act. The Greenway Trust’s successful riparian restoration efforts within Lake Sammamish State Park have also created the opportunity for more comprehensive, in-stream large woody material restoration, which is planned for construction in the summer of 2023.

Volunteers have played a critical role in restoration efforts along Issaquah Creek. Since 2005, nearly 15,000 community volunteers have provided more than 62,000 volunteer hours toward restoration projects at Lake Sammamish State Park alone. Volunteers include employees of local businesses, youth groups, local residents, school groups, and many others. Volunteer efforts have complemented the efforts of Greenway Trust staff and seasonal staff, State Parks staff, local ecological restoration contractors, non-profit partners at other organizations, and the contributions of hundreds of AmeriCorps members from numerous programs who have participated in restoration activities at the Park. Over nearly two decades, these projects have removed substantial amounts of invasive plants, and planted more than 50,000 native trees and shrubs.

Comparisons of aerial imagery of the Park from 2002 against the same location in 2019 (below) provides a compelling visual testament to the success of the long-term effort to improve the riparian buffer along the Creek, as well as forest canopy improvements elsewhere in the Park. As late as 2002, the riparian buffer was either nonexistent, composed almost entirely of invasive blackberry and/or reed canarygrass, or (when it did include native tree cover) quite limited in depth, health, and composition. As of 2019, the recovered and improved forest canopy can be seen with the expansion of the buffer footprint (averaging more than 150 feet in most locations), and the reestablishment of native mixed coniferous-deciduous forest along the bank and throughout the active restoration zones. The pale green of blackberry monocultures is slowly being replaced with a more complex native forest throughout the Park. 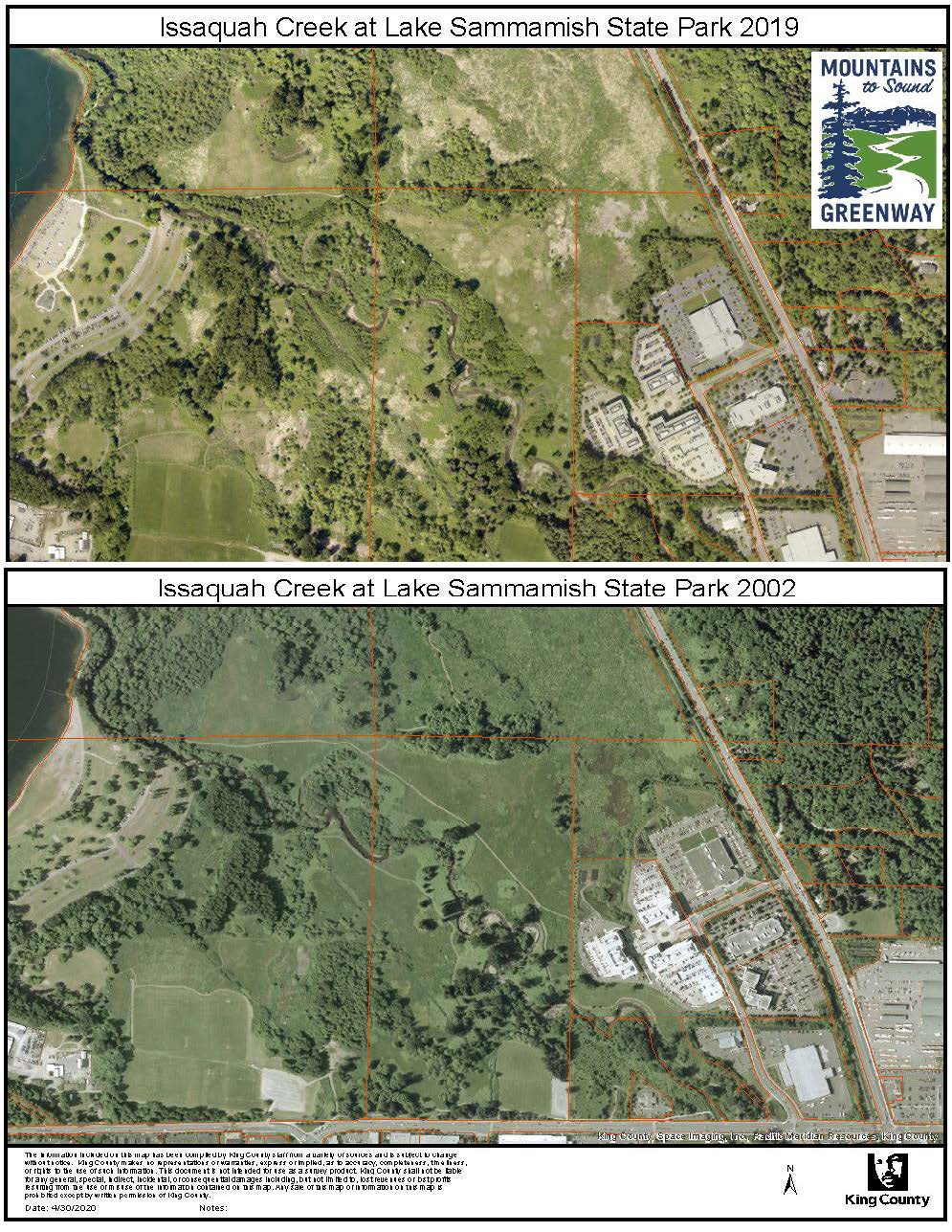