Skip to content
Learn › Blog › ‘Tis the Season for Skunk Cabbage in the Greenway!

‘Tis the Season for Skunk Cabbage in the Greenway!

To me, skunk cabbage (Lysichiton americanus) is one of the clearest and most fascinating signs of spring in the Northwest.

In low to mid-elevation wetlands along ponds, seeps on hillsides, and anywhere else mucky enough that your boot makes a wet squelch as you pull it out, lone yellow points begin pushing up from the ground in early spring. Soon, they open into bright yellow structures forming a hood over a thick, fleshy spike.

“What a strange flower!” you might think. But what you see at first glance only scratches the surface of the oddity that is skunk cabbage. What looks like a bright yellow, one-petal flower is actually just a bract, a modified leaf like the small green leafy parts you might see behind a dandelion or daisy flower. In fact, the flowers are tiny, greenish yellow points all over that central fleshy spike, each only ⅛ inch across or less. If you have a calla lily as a houseplant at home, this morphology should seem familiar – skunk cabbage is part of the same family.

For a plant to have so many flowers packed so closely together is risky. Even the most careful pollinator couldn’t avoid tracking the pollen from one flower into its neighbor on the same plant, and just like in many species, inbreeding in skunk cabbages isn’t healthy. But with flowers so tightly packed, how is a plant to avoid self-pollination? While each flower has both male (pollen-producing) and female (nectar-producing) parts, skunk cabbage are able to separate their sexes across time.

When a skunk cabbage spadix, or flowering stalk, begins to bloom, all of its flowers are functionally female. That means all are producing nectar and able to receive pollen, but not producing pollen themselves, eliminating the risk of self-pollination. A few days later, the flowers will stop receiving pollen and begin producing it instead, becoming functionally male. By separating its sexes over time, a single skunk cabbage plant can prevent self-pollination but still be able to reproduce with other plants nearby that bloomed slightly earlier or later. 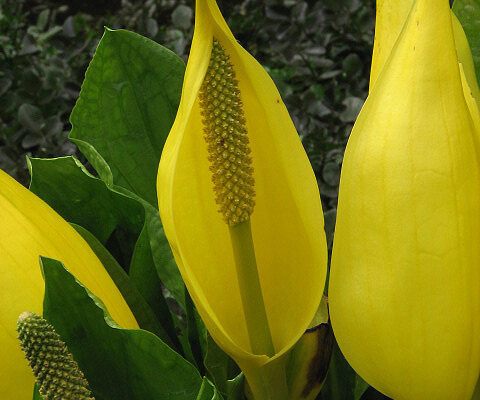 So how does pollination happen in the first place? Most flowers attract their pollinators with sweet-smelling nectar, a reward for their pollination services. But a skunk cabbage’s tiny flowers are too small to produce any nectar reward worth the energy it takes to find them. Instead, skunk cabbage takes a somewhat less classy approach. Rather than smelling sweet, skunk cabbage emits a stinky, skunky smell that attracts rove beetles, its main pollinator. These beetles congregate in the flowers to eat the pollen and mate, spreading pollen from one flower to the next.

After the show with the flowers is over, the leaves take over as the main event. They start growing all from a central stem soon after the flowers pass, and they continue growing long after the flowers have developed into pulpy reddish-green fruits. And then they keep growing, and growing, eventually becoming oval behemoths up to 5 feet long and nearly two feet wide!

Damage to the leaves makes the skunky smell even stronger. If you want to test it out, tear off a small piece of leaf, crumple it up, and take a big whiff!