Local nonprofits and volunteers are teaming up to make the trail safer and more sustainable for its nearly 300,000 annual visitors.

Rattlesnake Ledge, owned and operated by Seattle Public Utilities (SPU) and one of the most popular hiking trails in the I-90 corridor, reopened in late March 2021 after being closed for nearly a year due to the Coronavirus pandemic. During the closure, work started on some much-needed improvements to make the trail safer, more sustainable, and to help protect the natural environment. The work has picked up again this fall after pausing during the busy summer hiking season. Return visitors to the trail will already notice some major upgrades, and all hikers should be aware that they may run into a volunteer work party in the coming weeks.

The Rattlesnake Ledge Trail was originally built completely by hand in 2003-2004. At that time, those planning and working on the project expected the trail to see 50,000 to 75,000 visitors per year at the very most. Now the trail sees up to 300,000 users per year, far surpassing all expectations, and its popularity continues to grow. Other recreation sites in the region are seeing similar patterns of increased use as well, due to the growing population combined with heightened interest in outdoor activities, especially during the Coronavirus pandemic.

The initial project was a partnership between the City of Seattle-Seattle Public Utilities (SPU), the Mountains to Sound Greenway Trust (Greenway Trust), Washington Trails Association (WTA), and EarthCorps. Now the same partners are coming together to complete the upgrades to the trail. The Greenway Trust worked with SPU for about five years to design and plan the project, secure a grant, and prepare the trail for work to begin. The organization is overseeing the project, coordinating all the partners and leveraging each group’s respective strengths to get the work done.

“The way this trail was built was never intended to withstand the usage it’s seen in recent years,” said Mike Stenger, Recreation Projects Manager for the Greenway Trust. “This work is long overdue, and it’s really exciting to now have the funding and original partners working together to make these improvements.”

The trail upgrades include: 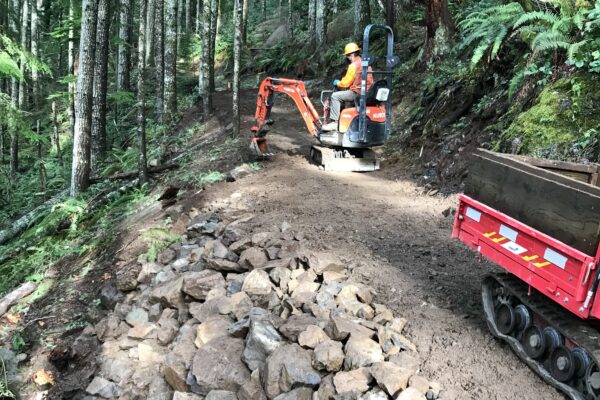 The first phase of the project was completed during the trail closure, during which time a contractor on a mini excavator removed large rocks and obstacles to clear the trail. Then 130 WTA volunteers put in more than 1,000 hours of work in spring 2021 and are picking up again this fall. Washington Conservation Corps and EarthCorps crews will also play a role in bringing the trail to completion. By the time all is said and done, it’s anticipated that volunteers will have invested roughly 5,000 hours in trail rebuilding tasks. While the bulk of the work will be done by the end of this year, things will officially wrap up in spring 2022.

“Rattlesnake Ledge is not only the first hike many Washingtonians take, but it is also one we return to time and again with friends and family,” said Jill Simmons, CEO of WTA. “We are thrilled to be helping to make key trail improvements so that this hike continues to be safe and enjoyable for those who visit.”

The organizations behind this project encourage all recreationists to practice good stewardship behaviors, which includes choosing to Recreate Responsibly and Leave No Trace.

“Every visitor to Rattlesnake Ledge plays a key role in caring for this special place. We can all help prevent damage by staying on the main trail, never cutting switchbacks, and always packing out your trash”, said Julia Munger, Watershed Natural Resources Manager for SPU, which is the agency that owns and manages the trail. “The same goes for issues such as parking. This is an extremely popular site, and we ask that visitors respect posted regulations and come back at another time if the lot is full.”

This project was made possible thanks to funding from the Nonhighway and Off-Road Vehicle Activities program, the Washington State Recreation and Conservation Office, and the support of SPU.