Skip to content
Learn › Blog › Raising a Forest: A Look Into the Greenway Native Plants Nursery

Raising a Forest: A Look Into the Greenway Native Plants Nursery

Washington can be characterized by forests that seem to stretch forever, but do you ever wonder how those giant trees can grow so tall? At the Mountains to Sound Greenway Trust nursery, we raise thousands of baby trees (and other native plants) to prepare them to thrive at one of our many restoration sites across the Greenway. There are currently more than 16,000 plants in our nursery—including a variety of coniferous and deciduous trees as well as many native shrub and plant species.

Creation of the Nursery

Our current nursery is a part of Lake Sammamish State Park in Issaquah and although the physical space has been here for many years, the first version of the nursery was not as large as it is today. The space was first built back in the 1980s by Washington State Parks, and the Greenway did not begin managing it until 1998. Back then, we were partnered with the National Tree Trust when they were providing non-profits with native trees. The Greenway needed more space to hold and grow these trees and so we reached an agreement with the state park to manage the nursery! Since the nursery was so small though, a series of improvements— starting in the late 1990s—occurred to expand it. An irrigation system and sprinklers were installed, as well as French drains to prevent flooding. Later in the early 2000s, the potting shed and its carport roof were built. These improvements were completed largely with the help of volunteers. The irrigation system was installed by various people who donated their professional services or time, and the concrete under the potting shed was poured with the help of a volunteer. In short, the nursery has come a long way in 40 years!

Sourcing Our Seeds and Plants

The Greenway does not raise all 16,000 plants from seeds. Rather, most of the plants in our nursery come from the Washington Association of Conservation District’s (WACD) Plant Materials Center located in Bow, Washington. Plants are kept there for one to two growing seasons before being brought to the Greenway’s nursery where they are raised for another season or two. This means all the plants in our nursery are all two to four years old.

Since so much time is put into growing these plants, we want to make sure that they are best suited for the growing conditions in our area. Many native plants have naturally evolved and adapted to their regional environment, so much so that planting seeds too far outside of their local ranges significantly reduces their chances of survival and makes them more susceptible to disease. These different areas where seeds are collected from the local plants are called “seed provenances.”  The Greenway Restoration staff carefully selects which zones our seeds and plants are coming from in order to match each native plant to its proper growing conditions. Climate change is continually affecting where we source our trees from. For specific Greenway projects, we are sourcing our tree seeds from zones that are further south, and thereby better adapted to dryer, hotter weather in order to account for future environmental conditions. This way, hopefully in 50 years these trees will still be suited to our region’s altered climate.

Working in the Nursery

Plants usually arrive from the Plant Materials Center in January and are bareroots—this means they are not in pots. Some of these plants are kept as bareroots and put into our heeling bed (where we place the plants together and pack them in loosely with soil). But the vast majority of plants are individually potted soon after arrival. From there, we use the light and water preferences of each species to determine where those plants are placed within the nursery. Some species have more specific growing requirements, while others are flexible and tolerate a wide range of conditions. For instance, Sitka Spruce prefer wet soils and sunnier areas, so we would move them to an open, lower elevation area in the nursery. Conversely, Tall Oregon Grape can tolerate sun, shade, dry or moist soils so they could be placed anywhere and would still grow well. A lot of thought goes into the layout of our nursery!

The nursery wouldn’t be what it was without the help from volunteers over the years. The physical design of the nursery was created with the help of volunteers, and each (non-pandemic) year hundreds more come out and help us pot up plants and clean up the nursery. The pots themselves must also be routinely cleared of fallen leaves and debris to ward off disease. Another annual routine is moving the plants around to prevent them from rooting through the black tarps that blanket the nursery floor; volunteers help us with this task and clean these tarps before relocating the plants. Through their contributions, volunteers are instrumental in upkeeping our nursery and ensuring the health and survival of all our plants. Since the past year has disrupted our usual process, our staff, trail and restoration crews, and AmeriCorps members have been spending more time in the nursery caring for our plants.

Progress in Our Nursery

Throughout the years, the nursery been expanded and improved to turn it into the space you see today! A lot of care goes into our nursery because it plays such a crucial role in all our restoration efforts, but it also provides a great opportunity for our community to come out and connect with the nature and landscape around us. Through the dedicated efforts of our staff (and many volunteers in a normal year), we are able keep the nursery and the plants thriving to carry out all our impactful restoration projects in the Greenway! 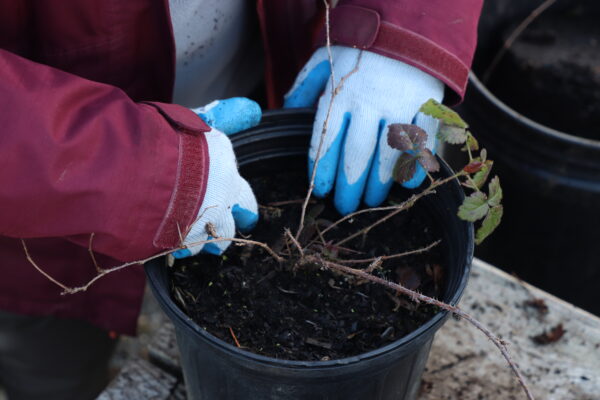 Learn more about restoration projects such as Stossel Creek here. Learn about our tree planting partnership with Carter Subaru here.