The testing ground will be Stossel Creek, a 154-acre parcel of land northeast of Carnation in the Tolt Watershed, which was purchased by the City of Seattle in 2015 through City Light’s Endangered Species Act Early Action Plan. The Greenway Trust, Seattle City Light, Seattle Public Utilities, and the Northwest Natural Resource Group recently received a $140,000 grant to undertake this trial from the Wildlife Conservation Society (WCS) through its Climate Adaptation Fund, a program that is supported and established by a grant to WCS from the Doris Duke Charitable Foundation.

Stossel Creek presents a unique opportunity to trial new methods to build resilience to climate change. Like many forests in Western Washington, the ecosystem is disturbed. Trees on the site were harvested by a private company in 2012. Since then, the site has partially regenerated on its own, but with limited trees and other vegetation. Invasive species have taken hold in some areas. It needs to be reforested, but the question is: With what? 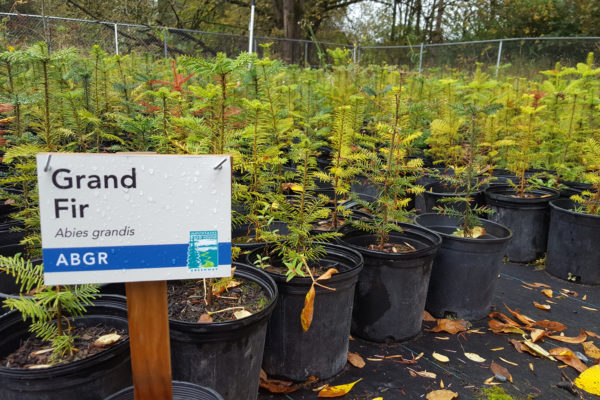 Over the next two years, Greenway staff will work with contractors, AmeriCorps members, and volunteers to plant native conifer species, such as Douglas fir and Western redcedar. Instead of using only subvarieties native to Washington, they will also include trees sourced from southwestern Oregon that are better adapted to warmer temperatures and drier summers. Over the years, the success of each variety will be analyzed and compared to its neighbors. Ultimately, project partners hope to determine which variety is most resilient to the changing climate forecast for the Tolt Watershed.

“The climate of the Stossel Creek area is projected to be similar to southwest Oregon by the end of the 21st century,” explains Crystal Raymond, Climate Adaptation Specialist for City Light. “Therefore, the trees adapted to southwestern Oregon are expected to be better suited to the Stossel Creek site as the climate warms. By increasing the tree genetic and species diversity, the site’s resiliency to climate change will increase over time.”

This pilot project will inform future climate-adapted restoration practices for lands owned by City Light, Seattle Public Utilities, and other forest owners in the region. The long-term goal of the reforestation effort is to establish a late seral forest that will be adapted to the climate of the mid to late 21st century, an innovative approach of adapting to the impending effects of climate change in the region.

Work to control invasive plant species will begin this spring and tree planting will begin in the fall. After planting, the team will have several opportunities to monitor success and communicate lessons learned from the project. Stay tuned for more information about ways to get involved and initial findings!