When we began restoring Issaquah Creek in the mid-1990s, we knew that only a holistic approach—coordinated with state, county, city, and private owners along the creek—would be successful. Invasive weeds don’t follow human-created boundaries, traveling instead by wind and waterways from one parcel to the next.

For nearly two decades the Greenway Trust has worked with partners, funders, and volunteers, and collectively rolled up our sleeves to tackle the giant mounds of Himalayan blackberry, Japanese knotweed, and other weeds that line Issaquah Creek. In their place, we’ve filled its banks with native trees and shrubs.

In the Issaquah Basin, this has led to the restoration of several important open spaces, such as Confluence Park, Squak Valley Park, Tibbetts Creek, and the iconic Pickering Barn site.

This year we launched several new restoration efforts aimed at some of the remaining outposts for invasives:

Lake Sammamish State Park. Since 2005, we have teamed up with State Parks on a major effort to restore nearly 40 acres of critical salmon habitat along Issaquah Creek. This year we are starting the final 3.5 acres that was not yet in restoration. Funding from the King County Flood Control District, the National Fish and Wildlife Foundation, and Wells Fargo allowed us to remove the blackberry and install nearly 16,000 plants to restore the forested edge of the creek.

Salmon Run Nature Park. This is the latest City of Issaquah restoration project along Issaquah Creek, part of a long-term strategy to restore riparian lands throughout the city to reduce flooding and improve salmon habitat. The new park is adjacent to Berntsen Park, which connects to Confluence Park and Margaret’s Meadow, and helps build a contiguous open space that could be connected by trails in the future. Volunteers will help plant 9,000 native trees and shrubs this fall.

Private Creek-side Properties. Since 2012, we have worked with more than 150 private landowners along Issaquah Creek to remove knotweed from their property and install native plants. These services were provided free of charge to the landowners thanks to generous support from our funders, including the King County Flood Control District and the U.S. Environmental Protection Agency via the Washington State Department of Ecology. So far we have successfully installed tens of thousands of plants and continue to expand the program to other interested landowners.

In-Stream Restoration. Most of our previous efforts have focused on restoring the habitat surrounding rivers, but we’ve just started a new initiative to focus on the health of the actual water channel itself. Salmon need riffles and pools in the river—formed by fallen trees and branches—to rest during their migration and for spawning. Many of our region’s creeks have been channeled and have lost these resting areas, so we are exploring ways to rebuild them. We have just received funding from Boeing and the King County Flood Control District to begin studying these possibilities along Issaquah Creek in Lake Sammamish State Park.

Community volunteers play a big role in restoring Issaquah Creek. Join us this fall as we host several weekend tree planting events, including our Tree Planting Celebration, presented by Carter Subaru, on October 22. 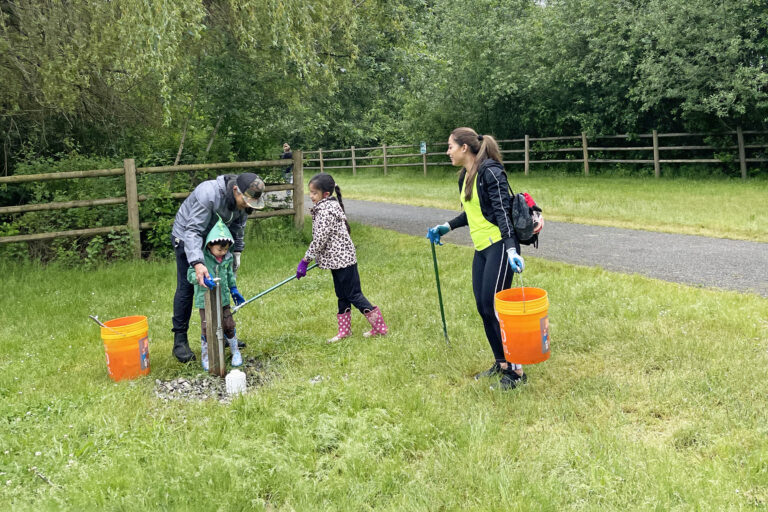