Recent conservation successes in the Greenway 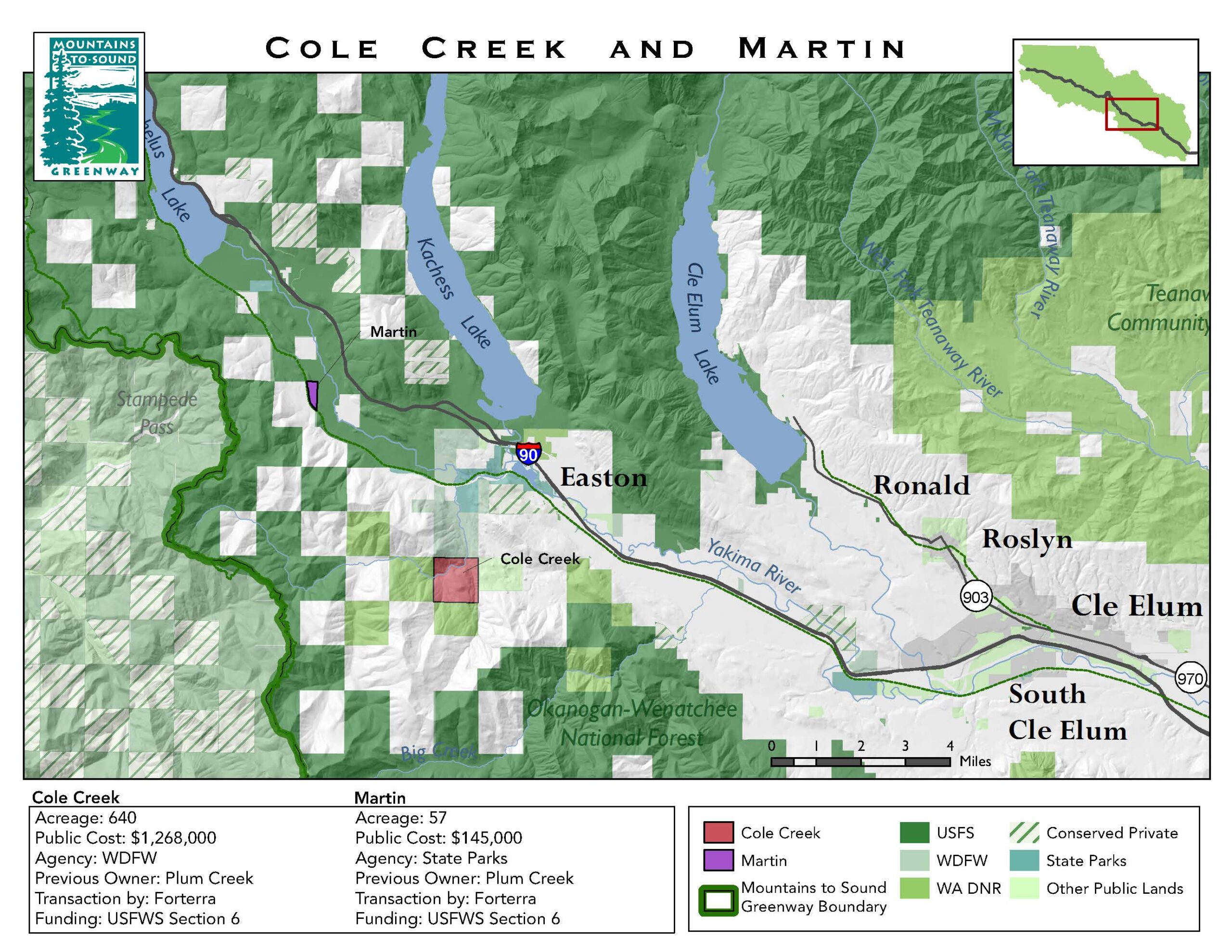 In late December, Forterra acquired and transferred a full section of land (640 acres, one square mile) near Easton into public ownership with the U.S. Fish and Wildlife Service. The land is known as the Cole Creek Section and was previously owned by Plum Creek Timber Company. Around this same time, Forterra also acquired a 57-acre parcel along the John Wayne Pioneer Trail, called the Martin Parcel, to be conserved in public ownership with the Washington State Parks and Recreation Commission. Funding for both properties was provided by the U.S Fish and Wildlife Service in the amounts of $1.27 million for the Cole Creek Section and $145,000 for the Martin Parcel. Both of these properties help fill in gaps in a “checkerboard” pattern of land ownership, the result of federal land grants given to railroads in alternating square miles during westward expansion in the 19th Century. This ownership pattern creates problems for land managers as they work to protect wildlife habitat, water quality, and recreation and manage efficient, productive forestry. The acquisition of these parcels also benefits the State Department of Transportation’s work to create wildlife corridors across I-90 in this area. 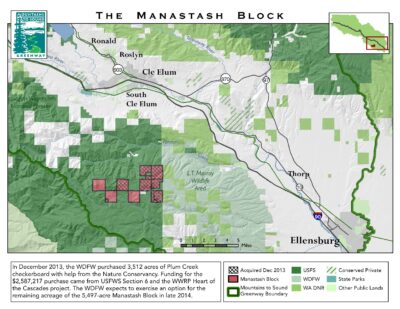 The Washington Department of Fish and Wildlife, with help from the Nature Conservancy, recently completed the first phase of the Manastash Block property acquisition by purchasing 3,512 acres, six more sections of the checkerboard south of Cle Elum. This property was acquired from Plum Creek Timber Company and helps fill in gaps in U.S Forest Service lands near the L.T. Wildlife Area and supports the migration of many species of fish and wildlife, including elk. Funding for the $2.59 million purchase came from U.S. Fish and Wildlife Service and the Washington Wildlife and Recreation Program, Heart of the Cascades project. The Washington Department of Fish and Wildlife expects to exercise an option for the remaining acreage of the 5,497-acre Manastash Block in late 2014. 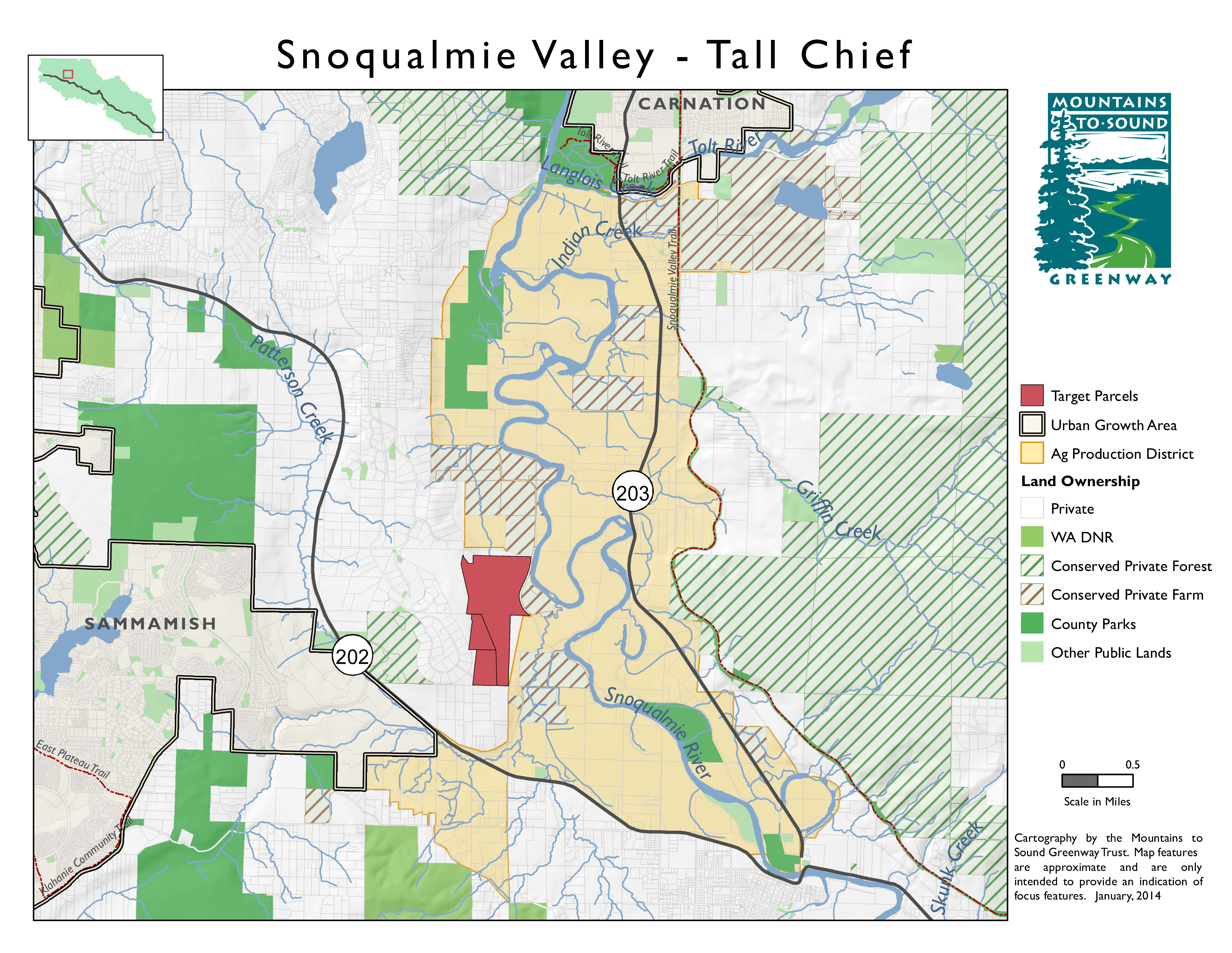 King County recently acquired 191 acres near Carnation that was formerly the Tall Chief Golf Course. When the golf course closed in 2009, a developer bought the land and proposed to build 18 high-end homes. The property is located near the Snoqualmie Agricultural Production District and was a dairy farm before a golf course. The farming community in the Snoqualmie Valley came together around this property to see this rich-fertile land brought back into agricultural production. The County worked hard for many months to find funding and was able to acquire the property at the end of December 2013 for $4.54 million. King County has not yet determined who will work the former Tall Chief land.