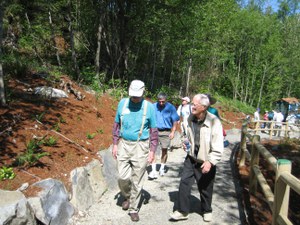 Rattlesnake Mountain is the long, forested  ridge that parallels I-90 just south of Snoqualmie and North Bend.  It runs 7 miles from State Route 18 to Rattlesnake Lake and the Cedar River Watershed.

In 1991, when the Mountains to Sound Greenway Trust set about conserving the farm and forest lands along I-90 for habitat, scenery and recreation, most of Rattlesnake Mountain was owned by some of the region’s largest timber companies. The Greenway Trust has worked since 1993 to encourage public purchase of this mountain top ridge.

Today, 3,600 acres of Rattlesnake Mountain belong to the public. Half of those acres are managed as a Natural Scenic Area, co-managed by the Washington State Department of Natural Resource (WADNR) and King County.  Other forest lands on the mountain will remain as working forests in perpetuity, managed by WADNR and the United States Forest Service.

For many years, a steep, rugged trail took hikers up the eastern end of Rattlesnake to “the Ledge,” a rock outcropping at the 3,000-foot level.  Views to Mt Si, the Snoqualmie Valley and the vast forests of Seattle’s Cedar River Watershed are spectacular.

Until this year, hiking the remaining 8.8 miles along the spine of Rattlesnake Mountain required bushwhacking over fallen trees, thickets of brush following very little in the way of a trail.

In 2002, with the help of the Greenway Trust, the City of Seattle supported construction of a new 2.1-mile trail to the Ledges.  Volunteers from the Washington Trails Association, EarthCorps and the Greenway Trust put in over 20,000 hours to complete the new Ledge Trail.  Today, an easier Ledge Trail attracts over 100,000 visitors a year.

The completed Rattlesnake Mountain Trail is 10.2 miles long, with an elevation gain of about 2,460 feet and a high point at 3,460 feet.

Sweeping views from viewpoints include the front range of the Cascade Mountains to Mt. Baker in the north and views south to Mt. Rainier and the southern Cascades volcanoes.

Hikers can now get onto the new cross-Rattlesnake Mountain Trail at two locations:

Public landowners of the ridgeline of Rattlesnake Mountain are:

The City of Seattle, King County, the State Department of Natural Resources and the US Forest Service.

The funds to add a complete Rattlesnake Mountain trail and trailheads on the edge of the Seattle metropolitan area came from the City of Seattle, The Washington State Department of Natural Resources, the state Interagency Committee for Outdoor Recreation, the National Recreational Trails Program, the State Legislature and the Mountains to Sound Greenway Trust.

The new Rattlesnake Mountain trailhead at Snoqualmie Point is owned by the US Forest Service. It was designed by the State Department of Natural Resources, built by the Greenway Trust and will be maintained by WADNR and the City of Snoqualmie Parks Department.

From Ellensburg to Seattle, the Greenway encompasses spectacular public lands, productive working farms and forests, opportunities for outdoor recreation, and vibrant communities with strong economies. Through advocating local, state and

Snoqualmie Lake is a large, peaceful destination within the beautiful Alpine Lakes Wilderness. This trail is unique in that visitors can begin their adventure from either Highway 2 or the

Continue Reading : Improvements Made to the Snoqualmie Lake Trailhead in the Middle Fork Snoqualmie River Valley

City, state, and federal leaders came together today, despite some very rainy weather, to celebrate the completion of the latest Mountains to Sound Greenway Trail segment in Bellevue. Watch the