A bright future for the Preston Mill

Imagine the sound of massive wood saws in a bustling mill town, turning stacks of logs into lumber to be used for new buildings in the rapidly-growing Puget Sound region. Logs were transported from the surrounding forests both by a flume flowing downstream as well as by steam donkey, or steam-powered winch, on a skid road to reach the mill pond of the Preston Mill Company. In later years, railroad logging trains brought logs to the mill in Upper Preston. The Preston Mill Company operated from 1896 to 1990, with mills both at the park site as well as Upper Preston, just upstream on the Raging River.

Today, the saws have given way to the sounds of cheers at the nearby soccer field punctuated by cars driving by. But the community of Preston remains tightly bound to its mill-town past.

Just east of Issaquah, the forests of Tiger Mountain and Grand Ridge still flank both sides of Interstate 90. In the late 1990s, local citizens, state and county agencies, and the Mountains to Sound Greenway Trust came together to figure out how to preserve this forested gateway to the foothills of the Cascades. Citizens of the unincorporated rural town of Preston envisioned a future that retained the forested backdrop to the community as well as retaining ties to its historic past, and published the Preston Vision in 1997 that articulated plans for land conservation, historic preservation and recreation connections.

Thanks to that early planning effort, the historic Preston Mill site was purchased by King County Parks in 1997. Now in 2015, after a call to action by founding Greenway President Jim Ellis, citizens are coming together again to envision a new future for the park.

With a generous donation and skillful assistance from Jones and Jones Architects and Landscape Architects, as well as a King County Community Engagement Grant from King County and a gift from the Preston Community Club, Greenway board members Doug McClelland and Ken Konigsmark along with residents of Preston carried out a planning process for the 22-acre park site earlier this year, resulting in a conceptual plan that would add trail connections, a wide lawn, groves of trees for solitude and reflection, access to the spectacular Raging River, a play area for children, interpretation of Native American communities in the area, and displays of Northwest logging and the mill town’s past.

With enthusiasm for this new vision for the mill site, King County Parks, community members, local historians and private donors are stepping in to help. Initial projects will create a large wildflower meadow, walking path and entrance sign, as well as historic interpretation depicting the site’s history thanks to a generous gift from Jim Ellis.

With its storied past, the future of the Preston Mill site looks bright indeed. 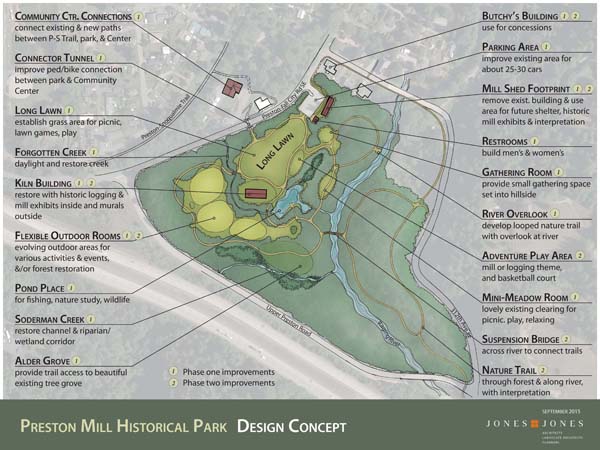 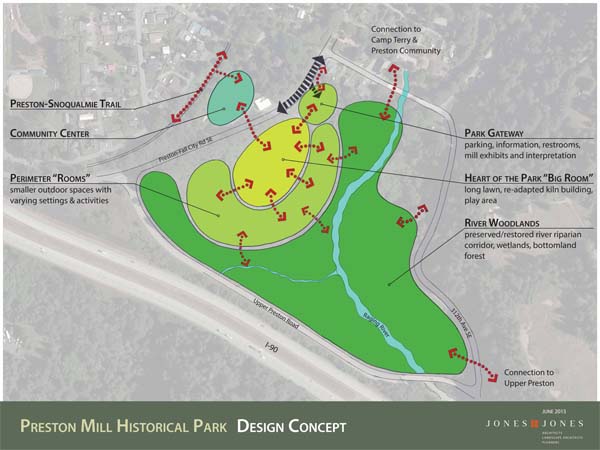 To read more on Preston Mill Park and the surrounding area check out these blogs: