Between 1930 and 1941, The Mountaineers sponsored Patrol Races, a back-country event described as 18 or 20 miles long on the crest of the Cascades between its Snoqualmie Pass Lodge and Meany Ski Hut at Martin near Stampede Pass. Three-man Patrol teams competed in what the Seattle Times called “the nation’s longest and hardest race.” The race was based on military patrol races common in Europe, used to train three-man units who carried equipment such as a machine gun and ammunition that had to be assembled to be operable.

The Mountaineers organization was founded in 1906. In 1914, the club built a lodge two miles west of Snoqualmie Summit, 1/4 mile SW of Lodge Lake at 3,200 feet elevation, 500 feet above Rockdale, a stop on the Milwaukee Railroad at the western end of its tunnel under the Pass. In the winter, the lodge was a “1 2/3-mile struggle over snow-covered trails” from Rockdale station. It could also be reached from Denny Creek by a steep 1 1/4 mile climb from the old ranger station, or a 40 minute walk on a one-mile-long “fine ski trail” from the Sunset Highway (the predecessor to I-90). It was a year-around lodge, accommodating 70 people, used for climbing in summer and skiing in winter. By winter 1927, skiing had become so popular that the lodge “was bursting with skiers throughout the winter and more facilities were needed.” 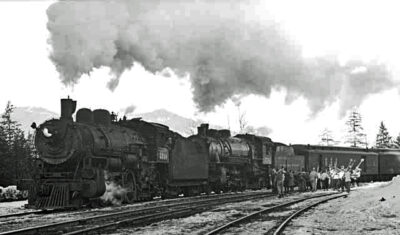 In 1928, The Mountaineers built a new facility near Northern Pacific Railroad’s Martin stop at the east end of its Stampede Pass tunnel. For many years, Martin attracted skiers because of the abundance of snow and the quality of nearby slopes. Skiers could take trains to Martin and stay in bunk cars provided by the railroad on a rail siding fitted with bunks, stoves and coal.

In October 1928, Edmund S. Meany, U.W. History Professor and club president, bought 54 acres near Martin from Northern Pacific for $125, which he donated to the club. In “two months of back-breaking labor,” club members built a 20×50 two-story frame hut, a “plain ski shelter without luxurious embellishments,” for fifty people. Train schedules allowed “a full day of skiing plus time for dinner and cleanup.” Round trip fare was $3.80, later reduced to $1.80. Meany Hut was five minutes from the train station, and could be reached in an hour on skis along a three mile trail from the Sunset Highway.

In 1929, The Mountaineers began holding annual downhill and slalom races and providing ski instructions. The club marked miles of cross-country ski trails throughout Snoqualmie Pass, including a roughly 20 mile trail between its Snoqualmie Lodge and Meany Ski Hut, placing orange-colored tin shingles high on trees so one was always in sight ahead.

In spring 1930, club races were held at Meany Ski Hut, starting downhill and slalom racing in the Northwest. Two immigrants from Germany led the way: 17- year old Wolf Bauer won the slalom and placed third in the downhill; Hans-Otto Giese placed second in both. Both would become mainstays of skiing and mountaineering in the Northwest. Bauer competed in most of the Patrol races until WW II; started and taught The Mountaineers first climbing courses in the mid-1930s; completed many first ascents; and started the Northwest Mountain Rescue Council.

In 1930, the first Mountaineers Patrol Race was held for club members along the crest of the Cascades between the club’s lodges, going from Meany Hut to Snoqualmie Pass. The 1936 Mountaineers Application for membership in the Pacific Northwest Ski Association (PNSA) described the race rules and the course, which ranged in elevation from 2,700 feet to 5,000 feet, along the high line route from the Mountaineers’ Meany Ski Hut at Martin to Snoqualmie Pass Summit, via Stampede Pass, Baldy Pass, Dandy Creek, Meadow Creek, Yakima Pass, Mirror Lake, Mirror Lake Trail, Silver Peak Trail, the Mountaineers Snoqualmie Lodge and Beaver Lake Trail.

A “patrol” consisted of three skiers who competed as a team, each carrying a pack weighing at least 12 pounds that were inspected and weighted before and after the race. Racers had to carry emergency rations (raisins and a can of canned beef) and compulsory equipment (a light axe, two compasses, watch, three new plumber’s candles, 50 feet of 1/4 “ manila rope, first aid kit, map, flashlight, waterproof container containing strike-anywhere matches, and snow glasses). Prescribed clothing included shoes, sox, underwear, pants or knickers, shirt or jersey, jacket or parka, headgear and mitts, and an extra sweater or jacket, mitts and wool sox.

The entire course must be covered on skis. A competitor can exchange broken sticks or bindings but cannot change more than one broken ski. Waxing skis or repairing skis or bindings during the race must be done without the aid of anyone other than members of contestant’s patrol.

All three skiers started together; had to check in at posts at Baldy Pass, Mirror Lake, and Snoqualmie Lodge within one minute of each other; and finish within an interval of one minute or the patrol would be disqualified. The last member’s finishing time established the patrol’s finishing time. 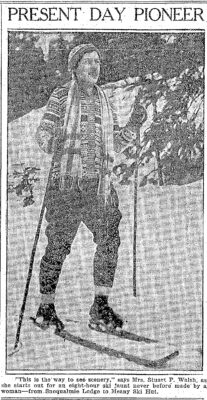 Before the first Patrol race, the Seattle Times of March 12, 1930, showed Mrs. Stewart Walsh, a Mountaineer who skied the difficult course – “the first woman to perform a feat that has been equaled by only six men.”

Men have always said women couldn’t make this trip. I hope by doing it, I’ve proved their error. I was tired, yes. We were on the way eight hours. But scarcely more tired than I have often been after an unusually active day. I only wish I could have made the trip sooner. I should certainly have organized a woman’s patrol to compete in this year’s race. Next year, though, just watch us.

Four patrols entered the first Patrol Race in 1930, where conditions were unfavorable due to several days of fresh snow. The team of Hans-Otto Giese, Andy Anderson and Fred Ball set a new record of 7 ½ hours.

No Patrol Races were held in 1931 and 1934. The 1932 race was won by the team of Norval W. Grigg, Fred W. Ball and Hans-Otto Giese. The 1933 race was won by “the hard-running team of Art Wilson, Herbert Standberg and Dan Blair,” in a record-breaking time of five hours and 32 minutes, “for a 20-mile trail breaking crusade.”

The 1935 race was won by the patrol of Art Wilson, Bill Dengenhardt and Scott Edison, in five hours, 35 minutes and 22 seconds, finishing six minutes ahead of Wolf Bauer, Bob Higman and Chet Higman. The trail breaking crew left with a several hour start and laid a perfect trail. The racers followed “the permanently marked but newly broken trail over rugged country” that took them as high as 4,500 feet near Tinkham Peak and as low as 2,900 feet near Meadow Creek Crossing. Seattle Times, February 15, 1935.

Click here to read part 2 of the story of the Patrol Races!

John is a lawyer, historian and author who has written extensively about Washington and Idaho history.  He is a founding member of the Washington State Ski & Snowboard Museum, and his essays about Washington ski history are published on Historylink.org, the on-line encyclopedia of Washington History, and the Central Washington University website for local authors, https://digitalcommons.cwu.edu/local_authors/.   He is the author of four books: Early Skiing on Snoqualmie Pass (2017)*: Sun Valley, Ketchum and the Wood River Valley (2020)**; Skiing Sun Valley: a History from Union Pacific to the Holdings (2020)*; and Ski Jumping in Washington: a Nordic Tradition (2021).