Skip to content
Learn › Blog › Microtrash: Not a Micro Problem

Microtrash: Not a Micro Problem

Let’s start with a little activity. Close your eyes and think about the last time you went outside: was it a walk around your neighborhood, a meet up at your local park, or even a trip out to your favorite trail in the Mountains to Sound Greenway? Now, what do you remember most about this trip? I bet you overlooked something that was right under your feet: microtrash!

In recent years, microtrash—and microplastic—has become a huge topic in sustainability and environmentalism. That’s because we are starting to understand more about the scope and consequences of our waste practices. Microtrash is being found in all major waterways around the globe and it’s having a significant impact on some of our most important wildlife!

As the name implies, microtrash is waste that breaks down over time into small pieces. This includes a whole variety of materials, including plastics and fibers. Commonly seen microtrash includes plastic bottle caps, fishing nets, gum and candy wrappers, cigarette butts, and even small pieces of glass. Think back on your last trip outside. Did you notice any microtrash? If you didn’t, try to take a closer look the next time you are out.

That one plastic bag you saw drifting down the street might seem harmless, but one major problem with microtrash is that it breaks down into thousands of small pieces, which makes it extremely hard to collect and get rid of. Microplastics (plastic particles less than 5mm) have a lifespan of thousands of years! All this forgotten waste adds up to millions of microtrash pieces, and when it rains those pieces run off into nearby water sources. Think about all the beautiful lakes and rivers that flow through the Greenway. Chances are, most (if not all) now contain microtrash. A 2014 study found that in the United States, an average of 1,285 microplastic particles were present in every square foot of river sediment. These numbers accumulate astronomically in the open oceans, with models now estimating that there are well over 50 trillion pieces of microplastic in our oceans.

All of this means that the marine life in our region is especially vulnerable to microtrash. Most people have heard about sea turtles mistaking plastic bags for jelly fish. Yet, the reality is that microtrash is so ubiquitous that wildlife cannot avoid it anymore. As microtrash flows into local waterways, it is eaten by small organisms, such as shrimp or fish. As those fish move out into larger waterways, they are eaten by bigger animals. In the Puget Sound, that could be a sea lion or an orca. The problem is that now these large mammals are indirectly eating the plastic from inside of the small organisms. This means that when an orca eats a fish—which makes up a significant portion of their natural diet—it could contain dozens of pieces of harmful microtrash.

Let’s do a little math problem. Say an orca eats 40 fish a day, and that each fish contains 10 pieces of microtrash. This means that every day that orca is eating 400 pieces of microtrash! The process where a toxic substance’s concentration increases higher up the food chain is called biomagnification. A study published in August 2020 found this occurring in white-throated dippers in South Wales. They concluded that the birds were eating about 200 pieces of plastic a day from eating freshwater invertebrates that contained microplastics. 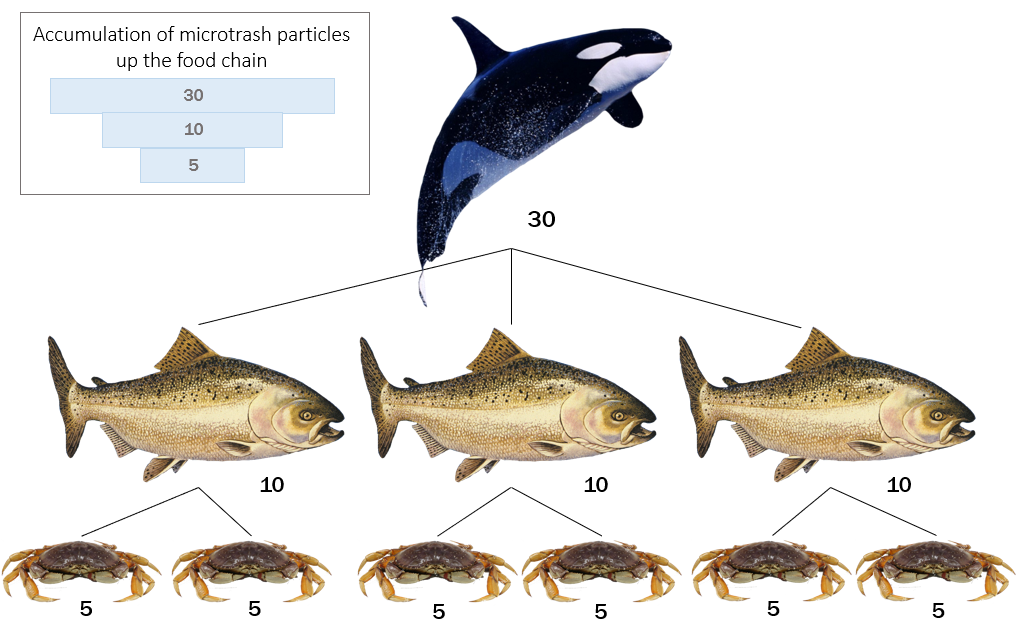 For all animals, there are many serious health risks involved with chronic exposure to microtrash. Not only is it toxic, but ingesting microtrash can cause digestive problems in animals and increase the chances of internal cuts and bleeding. Bacteria can also grow on microtrash, and this can have physiological effects (nutritional, developmental, immunological) on marine animals. For instance, blue crabs (Callinectes sapidus) that have eaten plastic have been studied and shown to have behavioral changes like increased aggression and a reduction of their respiratory function. In short, eating microtrash is very dangerous to animals’ health, and this creates a big problem for our local wildlife.

Many species in our area already live in vulnerable situations, and the presence of microtrash is threatening their environments further. Our Southern Resident orcas are federally endangered in the US and Canada, and their populations have declined by almost 20% since the 1990s. The Greenway is also home for endangered salmon species like the Chinook and Lake Sammamish’s Kokanee. Part of protecting these species is making sure they have healthy environments to live in. Cleaning up microtrash can be part of this mission!

You can be part of the solution! Everyone can take small actions to clean up and prevent microtrash:

There are many more ways to prevent microtrash from forming. Increasingly, we are seeing the harmful effects of microtrash on our local wildlife, so keeping our natural spaces and waterways clean is paramount for the health of important species like orcas and salmon. Picking up the trash you see around you and reducing your waste plays into this. Everything makes a difference through collective action!

Feeling inspired to pick up trash? Check out our handy trash pick up resources.

Read more about the problems with microtrash.