Skip to content
Learn › Blog › Filling in the Gaps

Filling in the Gaps

This spring, the Trust for Public Land (TPL) conserved 1,507 acres of forest on the eastern slopes of the Cascade Mountains. TPL purchased the two parcels from Plum Creek Timber Company, which has now almost entirely divested of its holdings in the upper Yakima Basin. Plum Creek had inherited a checkerboard of forestland from the railroad land grants given to the Northern Pacific Railroad in 1864.

The northern of the two parcels, a 593-acre section on the west bank of Kachess Lake, is next to the U.S. Forest Service’s popular Kachess Campground. South of I-90, the 914-acre section preserves a segment of the Pacific Crest Trail corridor. These acquisitions ensure that the forest near the campground and trail remains in public ownership for all to enjoy. TPL will transfer ownership to the Forest Service this summer with funding from the Land & Water Conservation Fund. 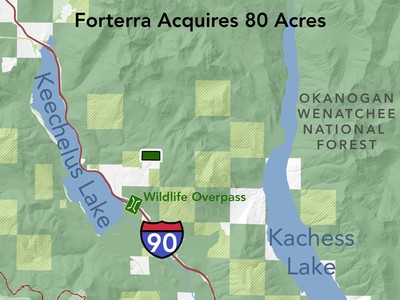 Forterra has acquired an additional 80 acres of forest land near Price Creek north of Interstate 90. Adding to the over 2,500 acres Forterra has already conserved as part of the I-90 Wildlife Corridor project, this parcel will help elk, bear, cougar, and other animals move north-south in a habitat pinch point along the Cascade Range. The location is especially valuable as it is near the planned Snoqualmie Pass wildlife bridge. Washington State Department of Transportation will start construction on the overcrossing this year.

By allowing large mammals and other wildlife to move across I-90, this preserved corridor and vegetated bridge will allow seasonal movement, genetic exchange between wildlife populations, and allow adjustments for climate shifting habitat, safeguarding long-term species viability.  Forterra acquired the parcel in cooperation with the Washington State Department of Natural Resources, which obtained a conservation easement on the property. The land was purchased with a grant from the Cooperative Endangered Species Conservation Fund, administered by the U.S. Fish and Wildlife Service.