If the hills of the Teanaway could talk they would tell tales of bubbling lava, ancient jungles roamed by coyote-sized horses, and a shoreline sculpted by great blocks of ice.

While all is quiet in the Teanaway now, the beauty that we enjoy today was formed by massive events that gave rise to one-of-a-kind geologic features. The fascinating landscape has a history of drawing people to its location, just a few miles east of Cle Elum, on the eastern side of the Mountains to Sound Greenway.

Here the work of erosion has exposed impressive constructions of resistant Roslyn Formation sandstone, remnants of 40 million year-old swamps and rivers that also left behind a coal field that was mined for more than 80 years.

Even older, a dark, blocky rock unique to this area, and accordingly named Teanaway Basalt, holds up the high ridges north and west of the forest. It was formed as continental plates moved and stretched creating cracks and fissures that basalt lava filled up from below. This process also formed small cavities in the basalt that later filled with silica-rich fluid. This fluid eventually crystalized and become rare Ellensburg Blue agates. It’s the only place in the world where the Ellensburg Blue agate exists. 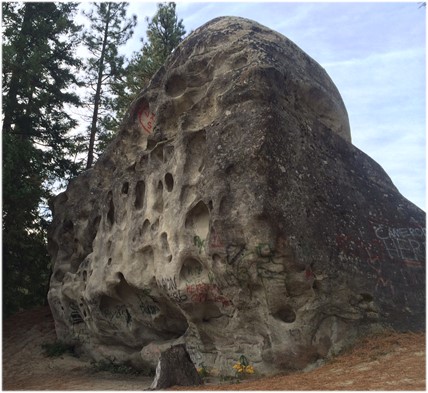 So, we see that these hills, or at least their rocks, do talk. The Division of Geology and Earth Resources, a part of Washington State’s Department of Natural Resources, is helping people to interpret what these stones say.

A new one-page geologic map and summarycenters in on the agency’s new Teanaway Community Forest and surrounding area. Print it and take it with you as you camp, hike, ride, ski, snowshoe, or otherwise climb across this special rockscape. Use it to spot signs of the area’s geology or explore points of interest in this scenic landscape. You’ll leave with a greater understanding and appreciation for how the surrounding mountains and valleys were formed.

Yet, for all that the hills tell us, there are many intriguing questions that geologists are still trying to understand. How often, and how large, were past earthquakes? What about the underlying geology has led to past landslides? In many ways, the Teanaway is still very much a land of scientific mystery. 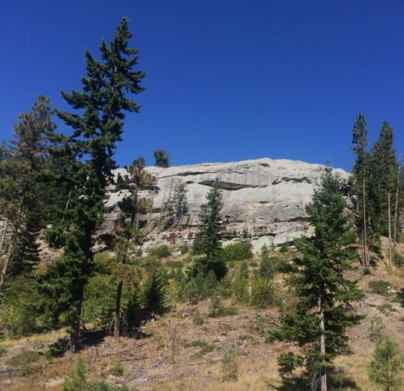 The more than 50,000-acre forest was added to the state’s inventory of landscapes in 2013 and is co-managed by the departments of Natural Resources and Fish and Wildlife as the state’s first community forest. The Greenway Trust joined forces with many other regional stakeholders to help draft a management plan for the Teanaway, adopted last year by the State, to outline how the forest should be cared for in the future. This plan calls for further investigation on a variety of topics to better understand the forest’s intricacies, potentially even area geology.

In the future, the Division of Geology and Earth Resources intends to produce more one-page geologic summaries for other landscape destinations. This one is available at www.dnr.wa.gov/Teanaway.

The Teanaway Community Forest is a popular recreation destination for snow sports, hikers, mountain bikers, horseback riders, ORV owners, and campers. Indian Camp, 29 Pines, and Teanaway campgrounds are now open and make good basecamps for exploring the area’s geology. Check trail reports for spring conditions. When you visit the Teanaway Community Forest, also remember your Discover Pass – its display on vehicles is now required, as it is for all state lands.