The birth of a new regional trail in the Greenway has just begun. As we reported last February, the first seven miles of trail have been started in Redmond and Kirkland, of a total 42 miles proposed, extending from Renton to Snohomish. The route follows the old Burlington Northern Santa Fe rail line that moved freight from Renton to Snohomish, following along the east side of Lake Washington.

As a truly urban trail—traveling along the downtown cores, business hubs, and neighborhoods of these communities—the Eastside Rail Corridor presents a unique opportunity to both promote healthy lifestyles and strengthen local economies.

In early January, the Greenway Trust joined forces with other regional partners to form the Eastside Greenway Alliance to advocate for the completion of this trail network. Alliance organizations include Cascade Bicycle Club, The Trust for Public Land, Transportation Choices Coalition (TCC), Forterra, Futurewise, Mountains to Sound Greenway Trust, and Washington Trails Association.

Eastside Greenway Alliance aims to build a new way to move, connect and live on the Eastside through strong collaboration with corridor owners, stakeholders and other local partners. 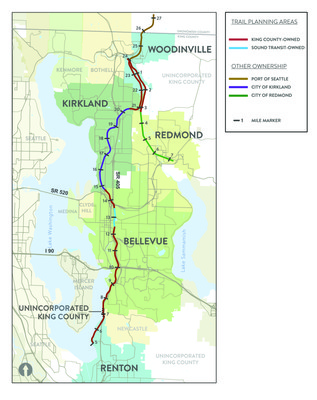 The Eastside Rail Corridor is a former  rail corridor extending from Renton to Snohomish. Kirkland and Redmond have built sections of multi-use trail through segments of the corridor, and the rest of the region is pushing for connections to the north and south of these community assets. Two months ago the Metropolitan King County Council unanimously approved the removal of rails through King County owned sections of the corridor, further emphasizing political support, enthusiasm and urgency to move this regional multi-use development project forward. The King County sections will be open for pedestrian and bicycle use after the rail is removed.

As the Eastside population continues to grow and attract talented professionals, the Eastside Rail Corridor becomes a critical component to improving the economic, mobility and quality of life opportunities for residents of the region. Eastside Greenway Alliance’s goals include building community support, bringing expertise to the development project and bringing together nonprofits to align work and develop strategy under a common vision to advance the multi-use development of the Eastside Rail Corridor.

We’re excited to join the Eastside Greenway Alliance and continue to ensure access for all to safe, off-road, regional trail connections for commuters and recreation-seekers in the Mountains to Sound Greenway.

See what our Alliance partners are saying:

“The Eastside Rail Corridor is more than just a trail; it can become a linear park system, like many of the great urban trails across the country,” said The Trust for Public Land Washington State Director Paul Kundtz. “The ERC will provide recreation opportunities for pedestrians and bicyclists, an alternative transportation route, a means to reduce carbon emission by getting people out of their cars, and a connection for communities and people.”

“The Eastside Rail Corridor is integral to creating the healthy, livable communities that all of Washington deserves,” said Futurewise Executive Director Hilary Franz. “Futurewise is excited to be a part of the Eastside Greenway Alliance.”

“Transportation Choices Coalition is happy to be part of the Eastside Greenway Alliance, and especially wants to make sure the design of the corridor makes sense for the community and preserves all uses for the corridor,” said TCC Executive Director Shefali Ranganathan.

“Momentum is building around the transformative potential of the Eastside Rail Corridor,” said Cascade Executive Director Elizabeth Kiker. “The wonderful amount of engagement during this past weekend’s Summit is a testament to the desire to create an accessible corridor that helps improve the quality of life of the region.”

“The Eastside Rail Corridor is a valuable asset that can act as a front door to connecting people to the region’s great hiking trails,” said Washington Trails Association Executive Director Karen Daubert.

“Completing the Eastside Rail Corridor is a key component of our 100-year Cascade Agenda, and Forterra is glad to be a key partner in the Eastside Greenway Alliance,” said Forterra President Gene Duvernoy.