Camp among Teanaway ghosts in Casland

Head to the 64-site Teanaway Campground near Cle Elum these days and you’ll find a grass plain dotted by shady conifer trees. Amenities include all of two toilets, a dirt road, and new picnic tables. Yet, if you were to find yourself back in time nearly a hundred years ago, this would have been the bustling 50-acre company logging town of Casland.

In Casland, you would have had access to a general store, blacksmith, tack shop, bank, hospital, school, and a community/dance hall. If married, you may have lived in a house, and if single, you would have headed to a bunkhouse each night. Eventually, the town was served by both plumbing and electricity.

To get to Casland, you would have probably arrived by narrow-gauge railroad – initially it was the only way to get there. The 1914 railroad and its Cascade Lumber Company builder gave rise to both the semi-permanent town and its name – a derivative of “Cascade Land”. The trains were served by stations, a locomotive machine shop, roundhouse, and switching yard. Engines and their cars would have been chugging up and down the Teanaway’s valleys transporting lumber, supplies, and people.
Casland thrived from 1917 through the 30s, declining over the next two decades. As late as 1972 buildings still stood in the area next to what had already become a popular spot for camping. 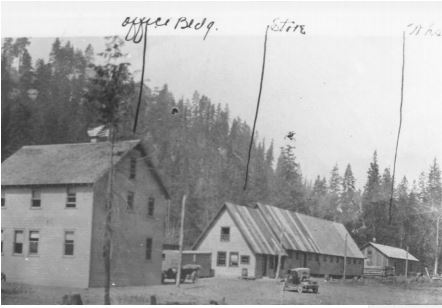 Today, not much evidence of Casland exists, though lucky campers may stumble upon an old bottle or piece of machinery. If you do, we ask you to leave such items where they were found. Though, before doing so, consider sending a photo of your find, with its GPS coordinates, to Maurice Major at Maurice.Major@dnr.wa.gov. Major is the DNR cultural resource archeologist currently working to record this location as archeological site. Recently, DNR and WDFW recreation staff worked closely with Major to locate campsites away from culturally sensitive areas so that future generations may also experience the thrill of uncovering our State’s rich cultural history.

And, some evening if you find yourself camping here and sitting on the banks of the Teanaway River, where the middle and west forks come together, keep an ear out. Maybe you’ll catch a train whistle or the music and laughter from a yester-year community hall dance. It is, after all, a captivating landscape.

Originally published September 13, 2015 on DNR’s ‘Ear to the Ground’ blog.

Editor’s Note: The site of the former town of Casland is located on the eastern side of the Mountains to Sound Greenway, at the gateway to the now popular Teanaway River Valley recreation area and the new Teanaway Community Forest.