A Ditch by Any Other Name in Thorp

The community of Thorp may be best known to most Greenway travelers for the massive fruit stand bearing its name at Exit 101. The unincorporated town behind the fruit stand is made up of three dozen homes (give or take), a post office, a K-12 school, and a fire station. On the far edge of town sits the Historic Thorp Mill, connected to the homes, fields, and services by a complex web of irrigation ditches.

Like many other communities within the Greenway, Thorp formed around agriculture, and was shaped by the delivery of water through these ditches. Unlike many of those communities, Thorp still relies on those channels and ditches hand-dug in the 1800s. The system has been maintained, but not much has been modernized; water is still diverted from the Yakima River by an earthen trench and a crumbling wooden wing dam. The ditch itself is an old side channel of the Yakima, and still offers excellent spawning habitat for coho, chinook, cutthroat and rainbow trout in places where landowners allow trees to shade the channel.

In 2016, flash flooding caused a badly eroded section of the ditch wall to collapse into the channel. Not only did this clog the ditch, it also caused significant problems for a check dam and fish screen just downstream of the site. Local farmers quickly excavated the soil so water could resume flow, and the WA Department of Fish and Wildlife (WDFW) reinforced the embankment with hay bales and T-bars, creating a structure that would slowly trap sediment to stabilize the ditch wall. But with climate change melting our snowpack and dumping winter precipitation as rain rather than snow, the ditch needed more work to avoid another collapse. 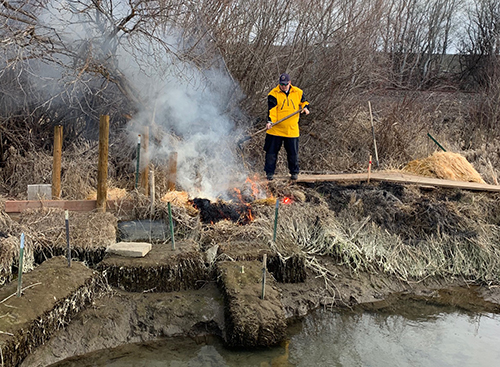 Once the ground cooled, they returned 100 cubic feet of dredged soil to the reinforced embankment using wheelbarrows and hand tools. With the dirt in place, the crew split into groups to harvest live cuttings from riparian tree species within ¼ mile of the site. 775 cuttings were taken from cottonwood, red osier dogwood, coyote willow, and birch. These cuttings, or ‘live stakes,’ were then used to pin 25 square feet of weed-exclusion tarp into place over the bank. 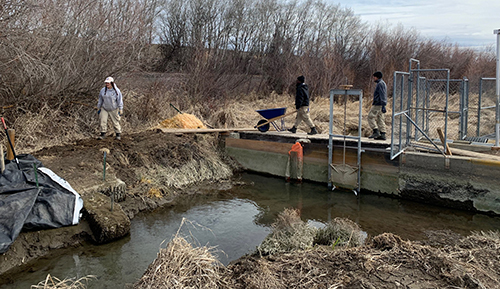 In years to come, those live stakes will put out a network of roots that will hold the soil in place against future floods. Burning off invasive grasses and laying down tarp will give them a better chance of surviving against weeds that might otherwise choke them out. Not every stake will become a sapling, but those that die back will add to the tangle of roots, branches, and hay bales that reinforce the bank. As they grow, their limbs will overhang the ditch, providing cool shade and a feast of native insects for any fish rearing upstream of the screen.

By improving the stability of the ditch itself, Greenway AmeriCorps members took the first step in a much broader project to improve water supply and quality along the Thorp reach of the Yakima River. Coordination for this project has kick-started conversations among stakeholders about how to fund a river reach assessment study, identification of key floodplain properties, additional habitat restoration projects, and improvements to the ditch system. Although this is only one small piece of the puzzle, the time and effort our crews have put into the Thorp Ditch may see much bigger payoffs for habitat, clean water, and community health in the long run.

Click here to learn more about our work in the Upper Yakima Basin.